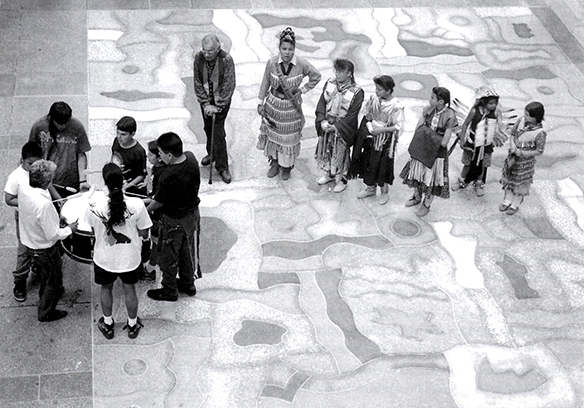 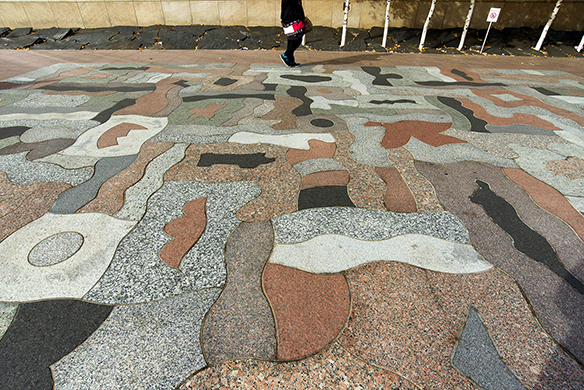 The 200-piece granite mosaic last located near Minneapolis Central Library has been restored to be reinstalled in the Loring Woods on Nicollet in Fall 2018. (Photo: Jerry Mathiason.)

Nicollet features a collection of public art that rivals the Minneapolis Sculpture Garden at the Walker Art Center. But it has a significant work of art that the Sculpture Garden lacks – a rare outdoor piece by esteemed Anishinaabe artist George Morrison, one of Minnesota’s most important Twentieth Century artists and also its most notable and honored Native American artist.

In Fall 2018, Tableau, A Native American Mosaic will be reinstalled in the Loring Woods to provide a gracious entrance to Nicollet from the Loring Greenway. The paving carpet contains over 200 pieces of stone cut from fourteen different colors of granite.

This is the third restoration and re-installation of the mosaic that was originally created in 1992 and sited near the entrance to the IDS Center. In 2004 it was moved adjacent to Minneapolis Central Library, between Fourth and Fifth Streets. Finally, the mosaic will be sited in a location, a landscaped grove with seating, especially suited for it.

Morrison’s other outdoor works are at the The American Indian Center in Minneapolis where he created a wood construction in 1974-75 that forms the exterior façade of the building and Churinga, 1992, a totem sculpture in bronze balanced upon a large igneous rock in a clearing in the woods at Fond du Lac Tribal and Community College, Cloquet, Minnesota. I had the honor of working with Morrison on this artwork commissioned by the State of Minnesota Art in Public Places program.