Ned Kahn’s mesmerizing Prairie Tree has been installed on Nicollet Mall near 11th Street in front of the WCCO building. Composed of  2,304 stainless-steel vanes, the kinetic work is entirely powered by an endless, renewable, free, zero-carbon energy source – the wind.

On sunny days, Prairie Tree reflects clouds and sky, and on overcast, windy days, shimmers against the grayness. Check out this lyrical and entertaining video of Prairie Tree.

This photo essay documents its installation:

Uwe Langmesser, supervising the installation, has worked with artist Ned Kahn for over twenty years. They met in the 1970s when they both worked at the Exploratorium in San Francisco, CA. Langmesser understands the attention to detail Kahn’s work requires and is assisted by Isabelle Pelissier.

Equipment and sculptural components staged in the street are readied for installation. Langmesser discusses rigging and sequencing with the crew from Rocket Crane. The local firm recently installed most of the artwork in the Minneapolis Sculpture Garden.

Floating aloft against the cloudless sky, the trunk is carefully lowered over power lines.

Sculptural pieces are unwrapped and readied for assembly and installation.

One of four “branches” is set into place and bolted to the trunk. Fit is so accurate and seamless, the joints are barely visible from street level.

20’ foot square frame of 6-inch diameter 316 stainless steel pipe composing the “prairie” portion of the sculpture is assembled, hoisted aloft, and settled into curved brackets atop the branches.

Pellisier assembles the units and hands them to Langmesser who carefully bolts each of the 2,304 vanes onto the steel cable grid. Installation was completed on August 18, 2017.

What is involved in creating a work of public art? First comes research, inspiration, sketches, then drawings, the conceptual design proposal, the design development proposal, construction drawings, and finally, once the design is vetted technically and approved – fabrication of the artwork. Many artists produce the work themselves if they have a large studio or access to a foundry or the facilities necessary for its construction. But often, the artwork is of such a large scale that it requires a team. Ned Kahn works closely with a talented group of engineers and fabricators to produce his work. He oversees its production and participates in its installation.

Here’s a behind-the-scenes look (especially for artists, engineers and the curious) at Ned’s design for Prairie Tree, in his own words:

Stretched across this horizontal frame will be a grid of 1/8” stainless steel cables spaced 8” on-center. Each crossing of the cable grid has a 316 stainless steel cable clamp. Welded to each of these cable clamps is a 3/16” diameter stainless steel rod that will support two wind-animated vanes that will be able to rotate freely 360-degrees. The moving vanes will be fabricated out of clear-anodized aluminum. Each aluminum vane will wrap around two UV-protected, black-delrin bushings that will be pressed into a rolled cylinder at one side of the vane and will have a hole to slide on to the 3/16” shaft. At the bottom of each moving vane will be a Teflon thrust washer.

All of the structural parts will be fabricated from 316 stainless steel. The artwork will be fabricated in sections and bolted together on site. All connecting bolts with are 316 stainless steel secured with Locktite or nylon thread locking bolts.  After the vertical pipes and the horizontal frame have been bolted together, the cables will be strung across the frame and tensioned.

About two years ago, I installed a similar tensioned-cable artwork on a roof-top garden at a school in Santa Monica. See video.

I used identical cables, tensioners and crossing clamps. This artwork has functioned flawlessly from day one and has not needed any maintenance or re-tensioning of the cables. We anticipate the same level of maintenance for Prairie Tree.

Durability of the Moving Parts

The rotating vanes that I am proposing for Prairie Tree utilize the same bearing system that I have used on kinetic projects going back over 20 years. The technology is essentially a hinge.

I grew up in a house in Connecticut that was built in the late 1700’s.  Many of the original door hinges are still functioning perfectly after 200+ years of continuous use. Hinges are a brilliant invention that has stood the test of time. In the center of the hinges on my wind-animated artworks is a black Delrin plastic bushing that rides on a stainless steel shaft. The combination of Delrin and stainless creates a bearing that can rotate for decades, requiring no lubrication or maintenance. I recently had the opportunity to carefully inspect one of my wind-animated artworks that was installed in 1995 on a building in downtown San Francisco. We took apart some of the bearings and found no visible wear on the surfaces after 20+ years of continual motion and exposure to weather and city dirt!

Stretched across the horizontal frame is a grid of stainless steel cables. Welded to each cable clamp is a stainless steel rod supporting a wind-animated vane that rotates freely 360-degrees.

The installation that I did for the Twins Ballpark in Minneapolis uses the same bearing system and hundreds of tensioned cables. This artwork has been up for over six years and, that I know of, has required zero maintenance.. Based on my experience with this bearing technology, I am confident that the Nicollet Mall artwork will function flawlessly without any maintenance for decades.

The artwork has been engineered to hold up to extreme winds and ice storms. Having virtually no horizontal surfaces, the cable net and the moving vanes cannot accumulate snow. The minimal surface area that the artwork presents to the wind makes it inherently safe in strong winds. I had a prototype of a similar cable net with moving vanes on the side of the New York Aquarium when Hurricane Sandy made a direct hit. The artwork was undamaged while the building was almost destroyed. The technology that I am proposing for this artwork on the Nicolet Mall has been thoroughly tested and proven robust through decades of storms, strong winds, ice, and hurricanes.

There is always the possibility of vandalism, but in my 30 years of creating kinetic public artworks, with over one hundred completed projects – I have never had anything vandalized.  In the unlikely event that this project does gets vandalized, all of the parts are easy to repair or replace. I can provide spares or generate them if needed.

The fact that the moving elements of the artwork have no horizontal surfaces also makes it very difficult for the elements to become dirty. The anodized surface of the aluminum is also excellent for shedding dirt and water. In my 30 years of making kinetic facades, none of them have ever been cleaned to my knowledge. One of the fortunate properties of a field of many small moving planes of metal is that it does not show the dirt. I think the natural action of the rain will be all the cleaning that the artwork will need.

The orientation of the thousands of small, wind-animated panels will almost constantly shift in response to the changing air currents. Because most people will be looking up at the artwork from street level, the resulting geometry of this means that the panels will be reflecting different parts of the sky; surrounding buildings; street lights; the moon, etc. You will see a visual mosaic of all the lit surfaces above and around the sculpture. I strongly feel that not only does the artwork not need lighting, it is actually an impossible thing to light.

The existing ambient street lighting, combined with the lights in the surrounding buildings and the glow of the urban night sky will provide all the lighting that is needed. All of this lighting is free and subtle and changeable and beautiful. The whole idea of the piece is that it becomes a register of the environment and this includes the ambient light conditions as well as the atmospheric conditions.

Another way to think about it is that we are creating a kinetic artwork that is entirely powered by an endless, renewable, free, zero-carbon energy source – the wind. It seems wrong to add an expensive, electric, carbon-generating, maintenance-needing, light fixture to light the work especially since the angles are all wrong and this light won’t do much except light the support structure which is not the point of the artwork. I do not think we need to add lighting.

Ned Kahn believes that all natural systems have an energy field blowing through them. He says that, “in a very direct sense, that is what all creatures are. Each one of us is an amazingly organized collection of molecules completely dependent on energy flowing through us – energy contingent on the air that you breathe, the food you eat. As soon as you cut off that energy source, the creature dies… Oppenheimer (scientist at the San Francisco Exploratorium; Ned apprenticed under him in the 1970s) talked about these little pockets of purpose in purposeless universe. Life is like these pockets of amazing order and patterns fighting the tendency of the universe to dissipate. So I started thinking about artworks that would have that kind of energy flow about them.”[1]

Ned works experimentally, by trying things and making prototypes. He says, “ninety percent of what I do is try things that give nature an opportunity to surprise me. A lot of these tests are failures… Sometimes I discover something completely different than what I expected… I follow my own line of inquiry… It is basically how some scientists work. One discovery leads to another.”[2]

Kahn practices Vipassana Buddhism (often called “insight meditation”) that he describes as similar to Zen Buddhism, but very pure in practice and not entwined with the ritual that most people associate with religions.

He explains that, “the Buddha said that everything you say should try to be true, useful, timely, to the point, and kind. It’s a really interesting model to think about in the realm of art. With those guidelines, I’ve tried to make art that’s true somehow, that’s directly linked to reality. Useful – a lot of the current projects I’m working on are artworks that also provide some useful function for a building, that provide shade, that divert heat, that reduce energy costs, that actively generate energy, and things that gather rainwater or reduce water usage. And then timely, I’ve tried to do artworks that are based in exactly what’s happening now, as opposed to some imagined future or remembered past. To the point is the idea of making something as simple as possible. And the last thing is kind. I’ve been drawn to make artworks that give people the opportunity to reconnect with nature, or to have a respite from the craziness of life.”[3] 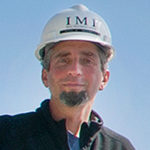