Nimbus was staged across the street from Central Library and assembled on a scaffold during November. The morning of the big lift, riggers from Rocket Crane attach chains and straps to the sculpture.

Test lift, off the supporting scaffold and a few feet from the ground, checks if the sculpture is level.

Fitting tolerances for the footing are fine-tuned at the site and measurements double- and triple-checked.

Nimbus will be lofted across Nicollet to the footing in the Theater in the Round in front of Minneapolis Central Library.

Several hours later, the sculpture is leveled and footings are ready…

Slowly, quietly, Nimbus is elevated and rotated. Within a few moments, it begins to descend.

The 18,000-pound steel sculpture is carefully lowered to the footing.

Lead welder Denise Bailey and architect-sculptor Tristan Al-Haddad, surprised and delighted by the cheers of observers with phones-in-hand who lean-in to get a better view and a picture.

The sculpture glides seamlessly into position on the stainless steel pins in the footing. More applause!

Tristan Al-Haddad and welders and riggers convene, discuss welding the sculpture in place.

Site work continues. In 2019, the final portions of Nimbus including perforated steel panels with LED lighting, will be added.

But for now, the journey of Nimbus is at an end; she’s home.

For the past month, I have been photographing from the berm overlooking the parking lot across from Central Library where Tristan Al-Haddad and his team are assembling Nimbus.

Curious people often come up and ask me about the sculpture. After I explain what’s going on, they offer observations. A young man with a silver stud in the center of his pierced chin remarked “… this is really badasss…” to which I agreed, and a black-spandex-clad bicyclist rolled up and commented, “this, along with the lights and chairs really adds to the hygge-ness of Nicollet…” I am glad to hear this affection voiced for the artwork and reincarnated Nicollet.

All photographs by Regina M Flanagan unless otherwise indicated.

Wednesday, November 14, 2020
Eight sections of Nimbus are strategically arranged in the parking lot across from Minneapolis Central Library to allow equipment to move between them.

Previously seen in digital drawings and animations, in-person, the physicality and colossal scale of Nimbus are becoming apparent.

Digital rendering of Nimbus hovering over Theater in the Round. Courtesy Tristan Al-Haddad and Formations Studio.

Sections are strapped to their wood fixtures or jigs. These jigs are critical components of the work. All sections were fabricated in Al-Haddad’s studio in Atlanta, Georgia on these jigs, strapped to them, transported to Minnesota on semi trucks, and unloaded at the site. The sections will remain bound to the jigs until assembly is complete.

Sections Seven and Two (known as the bridge or keystone pieces) strapped to their jigs.

Welders and fabricators from both Minneapolis and Atlanta were employed to build Nimbus. A three-person all-female contingent led by Denise Bailey, Senior Instructor in Welding and Metal Fabrication at the Dunwoody Institute, and also including Tiara Hill, Jane Thompson and Madison Vail, worked at Tristan Al-Haddad’s studio in Atlanta through the summer and fall. They toiled alongside his studio team including Thomas Clarkson, Bennett Crawford, Helena Kang, Sean Miller and Miriam Robinson.

Al-Haddad’s on-site team is assembling the sections into one unit that will be lofted over Nicollet to the footing already installed in the forecourt of Central Library. He brought Clarkson, welder, and Crawford, fabricator, from Atlanta and they are joined on-site by local welders Bailey, Ryan Cleary and Corey Beach.

Thursday, November 15, 2020
By afternoon, a full complement of fork lifts and Rocket Crane are on-site and two sections have been elevated onto the scaffold. (View of Sections Three-Four and Five-Six from Central Library.)

Nimbus will hover over Theater in the Round in front of Central Library.

Because of the low ceiling height in Al-Haddad’s studio in Atlanta, the sculpture was fabricated in sections on jigs on the floor. Now each section, attached to its jig, is being elevated into position on the scaffold.

Fork lift holds the first sections in place atop the scaffold.

A few feet off the ground and it is clear to Al-Haddad that the section is not level. It is lowered and several more lift points welded onto the section to level it.

Near sunset, the lift finally can begin. Within moments, Section Three-Four is high in the air…

…and pivoted and lowered onto the scaffold.

Sections are beginning to come together to create the overall geometry of Nimbus.

Fine-tuning the connection of Sections Three-Four-Five-Six continues into the twilight.

Monday, November 19, 2020
The largest piece, Section One that weighs 12,000 pounds and includes the footing, is standing up suspended from Rocket Crane and braced by the scaffold along with Sections Three-Four-Five-Six. (View from third floor Central Library.)

Section One, the heaviest section including the footings, requires eight lift points and the largest crane on site.

Rocket Crane suspends Section One and several fork lifts support the other sections in slings.

This is the first time Al-Haddad has been able to see the entire form come together in its final elevated position. Rocket Crane holds Section One in position while crew fine-tunes the alignment. 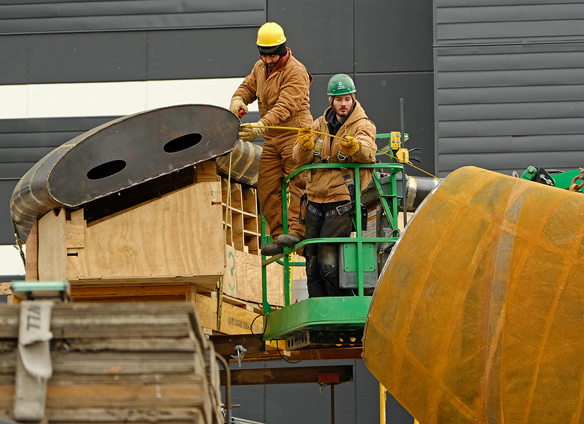 The bridge/keystone section is carefully lifted…

… and lowered into position.

Connecting bays (the two gaps visible between Section One and bridge/keystone pieces Section Two on the left and Seven on the right) must accommodate fit-up tolerances.

View of the site with crane and fork lifts from second floor Central Library.

Tuesday, November 20, 2020
All sections have been elevated onto the scaffold. Two fork lifts remain in place to support them. (View from the fourth floor Central Library.)

Slow process begins of working on the connecting bays on either side of Section One.

Connecting bay between sections at critical points in the sculpture’s curve.

All sections of Nimbus, each tethered to their jig, rest on top of the scaffold.

On Saturday, December 8, 2018, Nimbus will be untethered from the jigs, lifted off the scaffold by a very large crane, and set in the forecourt of Central Library across Nicollet.

Site preparation for Nimbus and the Theater in the Round is underway in front of Central Library on Nicollet Mall. The dimensions and character of the space are now revealed. The footing for Nimbus is visible next to the construction fence.

Tristan Al-Haddad on-site in May 2017 overseeing cast-in-place concrete foundation placement for Nimbus on Nicollet Mall in front of Central Library.

Plywood jig being fit up for tolerance check.

Tristan Al-Haddad is an architect and visual artist from Atlanta, GA whose interactive works, often presented in galleries and museums as well as public spaces, blur the boundaries between disciplines.

During his design presentation in November 2016, Tristan remarked that Nimbus is both derived from extrinsic site forces and projects its own intrinsic desires.

Cantilevered, balanced and seemingly defying gravity although constructed of steel

The sculpture’s form is derived from its site at the intersection of the primary axis of Nicollet Mall that aligns with the atrium of Minneapolis Central Library. Nimbus transforms the elliptical base-geometry of James Corner’s Theater in the Round into a levitating figure which frames both sky and the library through its oculus. Constructed like an airplane wing, the sculpture dramatically cantilevers 45-feet over the sidewalk and the theater. This 360-degree rendering shows the sculpture in context.

Inspiration for Nimbus.
Oculus: Framing the sky (in this case, the building). Aureola: Halo of light, soft bounded space, embrace, transformation, first sensation of space in the womb.

(Top and Bottom) Nimbus cantilevers over the seating area of the Theater in the Round and is constructed like an airline wing. (Construction drawings courtesy the artist)

In terms of intrinsic desires, the work aspires to create a visceral experience of light, form, and phenomena. It simultaneously provides a frame or threshold for pedestrians passing through it while also creating a gathering space that embraces those who pause and inhabit the theater. At night, the piece will flood the site with a halo of light, creating a glow and an uncanny ambiance.

The steel skin of Nimbus is perforated to create a light box – an envelope of light creates a visceral experience of light, form, and phenomena.

Tristan chose to construct the piece from weathering steel (cor-ten steel) for three reasons, “First, to set up a material dialog with Ptolemy’s Wedge, a sculpture by Beverly Pepper on the library plaza which is also made of weathering steel. Secondly, to speak to the post-industrial condition of the contemporary American city. Lastly, for practical reasons, because the material is self-healing which is critical in this highly trafficked and high-impact zone in front of the library.”

Spatially and Socially Activated Past Work

Movement, change, transformation, flux, cognition, illusion – Tristan employs these words when speaking about the work of formations studio, his collaborative workshop in Atlanta, Georgia, where he explores new electronic technologies for conceiving and depicting spatial ideas and invents materials technologies for fabricating his work.

From his earliest pieces, Tristan responded to architectural spaces and invited viewer interaction. Space Index, a pulsing, gyrating chartreuse-colored hourglass-shaped form, installed at the High Museum in Atlanta in 2006 explored cause/effect and user agency. With this dynamic and reactive work, Tristan aimed to, “challenge notions of art as static, art as exclusive, while simultaneously molding the spatial cognition of the users/players in the space.” The work also has a humorous aspect; to see a video of its dynamic behavior, visit Vimeo: Space Index.

Another witty piece is Pucker Up shown at the Atlanta Museum of Design in 2012. A wall relief in Corian®, a flexible industrial material commonly used in baths and kitchens, it explored slight variations in form perceivable from different angles by viewers.

Tristan’s current work is ambitious and expansive; engaging architecture and the dynamics of the city, itself.

The 2015 work entitled Stealth at 15th and Peachtree Street in Atlanta first appears to be a large-scale Minimalist sculpture in a plaza, albeit with figurative allusions – but as the city dweller navigates the space – it becomes animated. Describing the intentions of this work, he says, “the sculpture acts as an urban instrument binding neighboring spaces through visual corridors.” The folded form of pure geometric figures in dark concrete creates an urban portal that visually connects locations in the surrounding environment. The double cube and the elongated hexagon figures are fully perceptible from several blocks away. But as viewers move toward, around and through the work, the sculpture subtly transforms, expanding and collapsing in between two-dimensional figure, and three-dimensional form.

Two short videos about Stealth may be viewed on Vimeo:
model animation Stealth Animation and construction of the work on-site Stealth Constuction.

Allotrope Exi, an unbuilt work proposed for Dallas, Texas, was a grand gesture weaving together spaces and architecture in the downtown arts district. Composed of sculptural steel and magenta-hued polycarbonate bands that split and conjoin, fold and twist as they wind through the building lobbies and exterior plazas in a one-block-square area, Tristan remarks that the work, “sets up a series of spaces and carefully frames perspectival views that weave the public space of the city into the public space of the building – almost as if it were a cinematic construct. The piece is about creating a sculpture that engages both the Dallas arts district and the building and creates a bond and interplay between the two.”

Grotto, currently in design development, also conducts a conversation with architecture. The work is a highly-integrated architectural sculpture that animates the underside of a building’s 55-foot-tall portico where it creates a dynamic and luminous inverted landscape of light and color.

All photos courtesy of the artist.

Both materiality and technique are important to my work - Tristan Al-Haddad. Photo: Stealth, Atlanta, GA